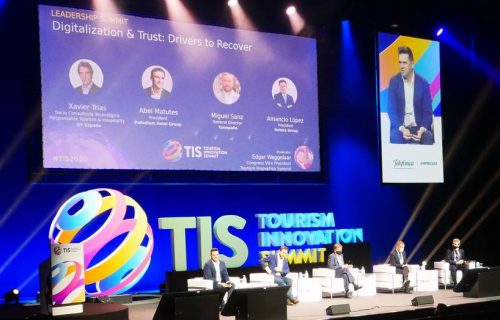 Seville, Spain, December 2, 2020 / TRAVELINDEX / TIS – Tourism Innovation Summit 2020 celebrated its first edition, which took place in Seville from 25 to 27 November. Three days in which this international tourism summit discussed the needs and challenges facing the sector in order to boost economic recovery after the health crisis. The first professional tourism face-to-face event as a call from the industry to showcase that this sector needs to get back on track, by meeting on-site in Seville.

Throughout the event, safety and health prevention were present everywhere at the congress. TIS2020 carried out a total of 1,263 antigen tests on attendees, 800 of which were performed at FIBES, the venue that hosted the congress, and just over 400 at the source and 400 from origin. “We have committed ourselves to be an example that the reactivation of the tourism sector is possible by carrying out antigen tests, both at origin and destination, a measure demanded by the sector in order to return to activity as soon as possible”, said Silvia Avilés, Director of TIS – Tourism Innovation Summit. Avilés also thanked the Seville City Council for their collaboration and efforts in holding TIS in the city, and the Andalusian Regional Government, who “have committed themselves to this international summit to reactivate tourism”.

A 3-day global forum inaugurated by Her Majesty the Queen, Doña Letizia Ortiz, in which she highlighted the value of TIS2020 “as a summit that will provide more elements of analysis to continue expanding the tourism value chain”. The first edition of TIS2020 had also the support and representation of the Andalusian Public Administration, with the presence of Juan Manuel Moreno, President of the Andalusian Regional Government, and Juan Espadas, Mayor of Seville City Council. Juan Manuel Moreno highlighted the valuable collaboration of the administration, while Juan Espadas sent a message of confidence by holding a forum with speakers and leaders of the international tourism scene in a safe environment and with the aim of restarting the industry.

The second day of TIS2020 was featured by the Regional Tourism Counsellors Agenda, with the participation of Reyes Maroto, Minister of Industry, Trade and Tourism; Juan Marín, Vice-President of the Andalusian Regional Government; and José Ramón Bauzá, Renew Europe’s Spokesperson on Transport and Tourism in the European Parliament. Digitalisation, technology and sustainability were the three main themes of the session. The Minister Maroto stated that it is “essential” to protect the business and talent of the tourism sector, for which the government plans to allocate 355 million euros from the Next Generation recovery funds announced by the European Union to promote the digitisation of the sector.

The Closing Ceremony of TIS2020 also included the participation of the President of the Government of Spain, Pedro Sánchez, to show his support for this meeting as an international forum to promote innovation and the digitisation of the tourism industry. During his speech, Sánchez stated that “we need a country’s budget to undertake the transformations we are talking about, and that the tourism sector deserves to be promoted, modernised and also to create added value and quality employment”. For this reason, he explained that “we have increased the allocation for trade, tourism and SMEs by more than 1.3 billion. This is the largest investment for the sector in the whole of democratic history. The government is clear about this; we want a country project to lead tourism in the next decade”.

Security, trust, digitalisation and sustainability as keys to recovery

Given the extraordinary circumstances in which the congress took place, in the midst of a pandemic and with extensive restrictions on mobility in many countries, TIS2020 gathered 1,263 visitors from 16 countries, together with 3,891 online visitors from 46 countries on five continents. Visitors who were able to attend the more than 180 hours of conferences with more than 200 experts who participated in the Tourism Innovation Global Summit congress.

The three days of the congress have highlighted the need to activate long-term strategies, based on models of collaboration between the private industry and public administration, which will make it possible to recover the confidence of travellers and the creation of sustainable and safe tourist destinations.

The public administration and the private sector represented in TIS2020

The first edition of Tourism Innovation Summit had a wide representation of political leaders, who participated in numerous sessions during the three days. TIS2020 has brought together the European administration, national, regional and local leaders and experts from the tourism industry to promote ways of cooperation and agreements for the development and revival of a key industry for the world economy. The event was attended by Her Majesty the Queen, who presided over the opening ceremony.

An international congress that has been supported by leading companies such as Amadeus, Telefónica Empresas, CaixaBank, Mabrian, EY, Mastercard, Magnolia and City Sightseeing, among many others.