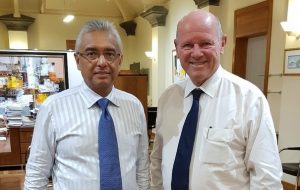 Air France touched down in Seychelles at 6.20 a.m. on 30th October with 222 passengers onboard the Airbus A330-200. The airline is taking over from its subsidiary, Joon, which stopped operations to the island nation earlier this year.

The French flag carrier will be providing three weekly flights between Seychelles and Paris-Charles de Gaulle. The flights will be on Sundays, Wednesdays and Fridays with arrival in the island nation at 6.20 a.m. and departure two hours later.

The previous French Ambassador to Seychelles, Lionel Majesté-Larrouy, had said in September that “Seychellois can travel directly to Paris and the French can come here directly. Seychellois can enjoy a shopping experience in the French capital and from now till March 2020, there is a promotional fare of $610 for return flights.” Ambassador Majesté-Larrouy who had been instrumental in getting Air France back on the Seychelles route was one of the invited passengers on the airline’s first flight to Seychelles.

France is currently the second leading country when it comes to visitor arrivals to Seychelles with over 33,000 French nationals coming to Seychelles, an archipelago in the western Indian Ocean, since the start of the year.

Air France currently does not have any competition on this direct route between Seychelles and France since Air Seychelles stopped flight operations to Paris in April last year.

According to a press release from Air France, flight offers by the airline are additional to that of its partners.

“Customers will thus be able to easily continue their trip to Praslin in the Seychelles, from Mahe, thanks to an offer of code-shared flights with Air Seychelles, or join Mahe from Nairobi, Kenya, thanks to six weekly frequencies on a code-share basis with Kenya Airways,” the airline said.

Mauritius Prime Minister Pravind Jugnauth has won a comfortable majority in the country’s election, according to final results released by the electoral commission.

“I have received a clear mandate,” for a five-year term, Jugnauth told supporters, adding that he would be prime minister for all Mauritians.

While voters choose 62 MPs, the commission appoints eight others from those who attained the highest scores but were not elected directly.

Under this system, set up to rebalance the distribution of seats between parties and communities in the Indian Ocean nation of four volcanic islands, the Morisian Alliance added four seats, the centre-left National Alliance three and the Mauritian Militant Movement (MMM) one.

The commission said roughly three-quarters of the prosperous archipelago’s one million eligible voters turned out to cast their ballots on Thursday, slightly more than the numbers for the last poll in 2014.

Mauritius is predominantly Hindu and is divided into ethnic groups under the 1968 independence constitution to also reflect the sizeable Muslim minority, the Chinese and the “general population”, those of Creole backgrounds or European origin.

Jugnauth’s victory has reinforced the legitimacy of a leader who took over from his father in 2017 without going through a vote.

The prime minister had urged the country to judge him on his short time in office, talking up economic reforms.

The 57 year old had pointed to his stewardship of the economy, which grew at nearly four percent in 2018, social reforms and an infrastructure drive when opponents denounced “papa-piti” (from father to son) politics during the campaign.

Jugnauth has also introduced a minimum wage of about $240 a month, increased pensions for the elderly and reformed labour laws. The first stage of a new light rail network is also scheduled to open in December.

But the diverse country of 1.3 million, situated roughly 1,800km (1,100 miles) off the eastern coast of Africa, is not without its problems.

Youth unemployment, at 22 percent, is also high and income inequality is seen as deepening.

It has also earned a reputation as a tax haven, and has come under fire for helping global companies park their wealth offshore, particularly those operating in Mauritius’ poorer African neighbours.

North Island Seychelles has a new Director of Sales & Marketing. Marcel Horande has now taken over since the November 4th when he announced that “we joined The Luxury Collection brand, hotels that define the destination.  Rest assured that North Island will keep its concept, name, and identity, still allowing us to reach the next step and take advantage of the technology and distribution of The Luxury Collection while maintaining its ultra-luxury sense of service and nature-feel privacy”.

Marcel Horande added in his communique:- “The resort remains open and our teams are currently working hard to create and deliver new unique experiences as well as improving even more the level of personalized service that has made our reputation.

Our latest collaboration agreement with starred-Chef Mr. Akira Back has upgraded our F&B offerings in all outlets such as LaidBack at the Piazza and the new Sunset Beach (previously West Beach).  Also, a much more flexible rate structure will allow you to offer your exclusive guests not only our current “All Inclusive” offer called Dream Rate, but also Bed&Breakfast, Half Board and Full Board rates than can offer more flexibility to your guests” said the new Director of Sales and Marketing at North Island.

Empowering Youth as a Key to a More Sustainable Tourism