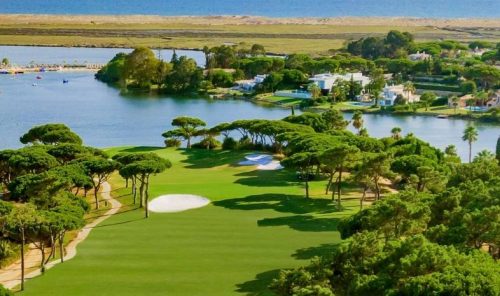 Quinta do Lago, Algarve, Portugal, July 29, 2021 / TRAVELINDEX / Quinta do Lago’s position at the forefront of ladies’ golf in Europe has received a ringing double endorsement with two of its new generation of stars excelling on the fairways across Europe this summer.

Teenager Sofia Barroso Sá confirmed her prodigious talent by finishing joint-second in the German Boys and Girls Open while Sara Gouveia claimed first place in the ladies’ competition, and third overall, at the third event of the 2021 Portuguese Golf Federation Tour.

Staged this year at St. Leon-Rot Golf Club – venue for the 2015 Solheim Cup – the German Boys and Girls Open is one of the most prestigious junior golf tournaments in the world and Sá produced an outstanding display to finish ahead of more than 100 of Europe’s best juniors.

The reigning Portuguese under-16 girls’ champion saved the best until last on the Rot Course, defying tricky weather conditions in south-west Germany to shoot a course-record one-under 71 in the final round of the 54-hole event to finish on a total of 210, two strokes behind Sweden’s Meja Ortengren.

Following a stellar amateur career which included winning the Portuguese under-18 girls’ title, Gouveia – who is based at Quinta do Lago – turned professional last year and has wasted no time in making an impact in the professional ranks, with her latest impressive performance coming at Troia Golf.

After carding a 76 in her opening 18 holes, Gouveia charged through the field in the second and final round, recording six birdies and four in the final six holes to shoot a two-under 70, one of only two players beat par at the event.

There was further good news for Quinta do Lago and the resort’s academy at Troia with Swedish teenager Maia Samuelsson, who is also based at the top Portuguese venue, finishing as the top amateur in 11th place overall after rounds of 79 and 74.

Jose Ferreira, head professional and academy manager at Quinta do Lago, said: “These results are nothing short of outstanding and I couldn’t be happier for all the players. It’s one thing to hit the ball well in practice but quite another to take that form into a tournament environment.

“They have proved that they have what it takes to compete at the highest level and the signs bode very well for the future for all three of them.”

The trio’s performances continue a fantastic run for Quinta do Lago’s academy and its talented group of boys and girls after the resort’s juniors won seven national titles in 2020 – including being crowned Portuguese junior club champions for the first time in its history.

Overseen by Ferreira, and his team of coaches, the resort’s junior team features more than 35 children in each development category – elite, competition and beginner – and age group.

Set amongst 2,000 acres of the picturesque Ria Formosa Natural Park and just a 15-minute drive from Faro airport, Quinta do Lago has been at the forefront of Europe’s elite golf, sports and family destinations for nearly five decades and features a combination of world-class golf and lifestyle facilities.

As well as three 18-hole championship golf courses – the North, South and Laranjal – and outstanding practice facilities, guests can enjoy an array of sports at the state-of-the-art performance centre The Campus, a world-class sports hub designed for professionals and amateurs alike to train and live well.

Complementing the facilities is a choice of 13 first-class bars and restaurants that deliver a range of delicious world cuisines, including the acclaimed Bovino Steakhouse and UMAMI – the resort’s first Asian restaurant which opened in May – and accommodation at the boutique The Magnolia Hotel.

About Quinta do Lago
Since its inception in 1972, Quinta do Lago has been at the forefront of international golf, hosting eight Portuguese Opens as well as numerous other international tournaments. Home to three world-class golf courses, the resort also boasts a wealth of cutting-edge practice facilities.

Set amongst 2,000 acres of the picturesque Ria Formosa Natural Park and located just 15 minutes from Faro airport, Quinta do Lago offers residents and guests an unparalleled location benefiting from a year-round temperate climate, a variety of lifestyle pursuits and a strong sense of community.

Seychelles to Welcome Back Cruise Ships in November 2021