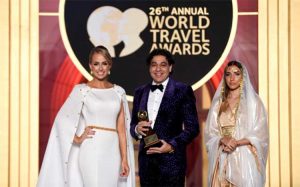 Muscat (Sultanate of Oman) – November 29, 2019 (travelindex.com) – Deepak Ohri, chief executive of lebua Hotels & Resorts, has been recognised with the prestigious title of World’s Leading Travel Personality by voters at the World Travel Awards.

In a world of identical ideas, it takes one person to break the mold and disrupt a whole industry… It takes foresight, it takes courage, and it takes knowledge to take a risk and refuse to be pushed into the accepted convention.

Unanimously voted as a trailblazer in the world of travel, Ohri has torn up the rule book to create his own business model, one that has seen him launch the world’s first ever vertical destination.

But why did he do it this way? Looking into growth models, he identified that only the ‘intangible’ had the movement to flourish within hospitality. Rooms are tangible; one knows what to expect from a room. From the moment you step into the booking process the features are fairly standard… A bed, a TV, a bathroom… And while there can be some luxury elements, there is nothing visceral. For a brand to survive it needs strong fundamentals, which are not formed through typical tangible features.

Food and beverage is emotional; there’s a connection… Sights, savoring, surprises… Together they create moments that cannot be fully rationalized, yet the memories last forever. And Ohri understood that by perfecting these areas, growth would be all the more glorious! This is what he has created; a tower where 10 different experiences reside. While other hotels and restaurants in Bangkok have faced a slowdown, lebua is still enjoying progression; ultimately this is due to Ohri’s ethos of always thinking from a customer’s point of view.

Of course, the process has taken time to polish, and Ohri has credited the success on two crucial elements – refining service processes and fostering financially sustainable growth models.

A contradictory method, both science and intuition are used to engineer the perfect storm; it’s a delicate balance that takes into account a many opposing factors – such as guests vs staff ratio – to ensure that services are perceptive and engaging without being too stifling or too empty, yet each venue is profitable due to carefully planned commercial calculations. His processes are now considered the gold standard within the industry, quite a feat within an industry dominated by mass market brands.

These eccentrically brilliant initiatives have seen Ohri speak around the world, including some of the best business schools in the world such as Harvard Business School, where he uses his experience and anecdotes to throw out the notions that students need to follow convention. Addressing to the next generation of industry leaders of such prestigious institutions have been particularly an honor given his humble beginnings – each of his further education institutions were government funded. They made a huge impression on him, and it was here that he made his quiet promise to create somewhere astonishingly ‘wow!’.

Tonight, is the culmination of 34 years of going against the grain; it is a celebration of one man who stood for what he believed was right; it is the industry acknowledging that being ‘wrong’ can be exactly the right thing…

Joining the organization as its first employee, Mr. Ohri created Bangkok’s best culinary destination – The Dome at lebua in 2004. The Dome houses a collection of stunningly beautiful restaurants & Bars such as Sirocco, Mezzaluna, Breeze, Distil and Sky Bar which are of international culinary acclaim and have won countless awards.

After the success of The Dome, Mr. Ohri rechristened the Meritus hotel as lebua, an all-suite luxury hotel in 2006. Then, he launched lebua Hotels and Resorts as a luxury hotel chain that includes exclusive properties in Thailand, an ultra-luxury lodge in New Zealand and India. He launched a new level of luxury hotel, Tower Club at lebua in 2008. The suites are located on the top floors (51st to 59th) featuring exclusive privileges; such as complimentary soft drinks and high speed Internet, Acca Kappa amenities as well as access to Tower Club Lounge.

Drawing on a career that includes operational and executive roles with companies such as Kempinski and Taj Hotels, Mr. Ohri has many years of experience in the international hospitality industry and brings an entrepreneur’s innovative spirit to his role as CEO. His professionalism has repeatedly earned him recognition as one of the leaders in the hospitality industry. Mr. Ohri’s ongoing admiration has led him to be honored with many industry awards from prestigious organizations worldwide.

About lebua Hotels & Resorts
lebua Hotels & Resorts is a rapidly growing international luxury brand that operates distinctive hotels, fine restaurants and exclusive bars in the Asia-Pacific region. Led by visionary CEO Deepak Ohri, the Bangkok-based hospitality group takes a unique approach to the service sector which aspires to tap into a deeper level of exchange with guests by creating emotional connections. It’s our belief that life’s truest luxuries are those that are built around these magical moments.

The Dome at lebua is an impressive collection of iconic restaurants and bars atop lebua’s Bangkok properties, famous for vistas that are breathtaking and a caliber of mixology and cuisine that attracts epicures from around the world; it also proudly holds the accolade for being the only hotel in Thailand with two MICHELIN-Starred restaurants.

Sirocco, a rooftop restaurant serving Mediterranean cuisine; Breeze with its pan-Asian cuisine; and Mezzaluna, a 2-Michelin-star restaurant that conjures up French cuisine with Japanese precision.

The collection of bars at lebua Bangkok are legendary, with Sky Bar often named the most stunning rooftop bar in the world, offering amazing views of Bangkok; Flûte – A Perrier-Jouët Bar, the world’s highest alfresco champagne bar; Alfresco 64 – A Chivas Bar, that takes whisky drinking to new heights; and Distil with its impressive liquor repertoire.

Further bolstering lebua in Bangkok’s reputation as the world’s first vertical destination are a number of recent additions, including lebua No. 3, the world’s tallest gin, caviar and vodka bar; Pink Bar, a gorgeous champagne bar; and Chef’s Table, which has recently won its first MICHELIN-Star within just eight months of opening.

Not resting on its laurels, the story continues for lebua and there are a slew of F&B launches in the pipeline, further cementing the brand’s status as a trailblazer in the luxury hospitality sector.