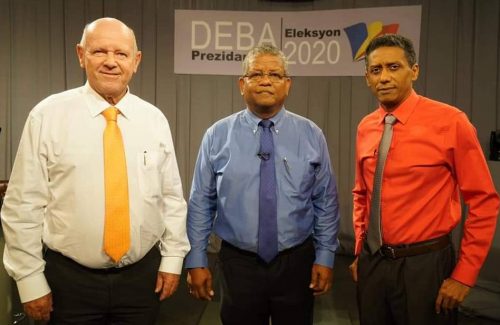 Victoria,Mahé, Seychelles, October 16, 2020 / TRAVELINDEX / The Presidential Debates were a momentous step forward for our fragile democracy. My only regret was that there were no questions pertaining directly to human rights which were put to the candidates. With key groups of people and the vulnerable members of society being traditionally overlooked and oppressed by Government, it is a pity that history repeated itself in these debates. When will they be given a voice? Particularly when traditionally overlooked by the media and key political parties and figures.

Moreover, while some candidates used their final two minutes during the debate to appeal directly to voters, one particular politician preferred to reveal his true nature by making a personal attack instead of justifying why the public should put their trust in him yet again. The trouble with targeting members of a third force who have bravely chosen to stand up to do what is right, and not what is easy, and to seek to undo all the wrongs of Government (whether it be by the Legislative or Executive branch of Government), you are only serving to keep the corrosive and toxic “ek nou, pa ek nou” culture on life support. Aspiring leaders who attack those who are breathing life into a weak democracy end up only undermining their own integrity and public confidence in their leadership. They also reveal to the public that they need a firm lesson in humility. They would do well to remain humble and to never forget where they came from.

One Seychelles is fiercely proud of the team they have assembled in a short span of time. We don’t all have the free time and funds to host “mini elections” within each district prior to nominations, after all. We are able to work and excel with what we have, and not hide behind a shopping list of excuses. It is recalled that the same leaders who once cried hoarse for a balanced Assembly are now arrogantly claiming that the only way they can do their work competently is if they have total control over two branches of Government. We alone recognize the necessity of having a balanced National Assembly. Leave “total control” over most/all branches of Government back in the past (during the one-party era) where it belongs.

One Seychelles was created for a reason. The movement has amassed significant public support for a reason, and we have become a true force to be reckoned with for a reason. The reason is that a growing proportion of the population is dissatisfied with the duopoly that has been a constant feature in local politics for too long; these veteran politicians had a real opportunity to prove their dedication to the people and their worth as viable leaders of the Nation over the course of the past four years, and many believe that they have failed in these respects. We would not be here today if the call for a new force in politics had not existed. People desperately want a change, but they want the RIGHT kind of change.

With both green and red camps making the election pitch for “national unity”, despite all their recent actions contradicting the notion, they seem to have lost sight of the fact that voters no longer trust politicians whose actions do not match their words.

Change cannot happen when we use the same outdated recipe and sub-standard ingredients we have been relying upon for 30-odd years. The only way to progress as a Nation is to embrace change, real change. Some boast about offering change, but their manifestos are eerily similar to that of the ruling party. Old ideologies and old policies cannot push the Nation forwards; we will only keep going backwards.

Everyone in the debate last night agreed that politics should be removed from Ministries. One Seychelles remains the only political party realistically capable of doing this, for we have not amassed years and years’ worth of promises to deliver upon and favors to return. We proposed a technocrat-led Government from the get-go, one comprising skilled and capable Seychellois, who were selected irrespective of their political affiliation. They are waiting and ready to hit the ground running on 25th October. They alone are capable of putting National interest ahead of political and personal interests.

Those who claim to want to lower the cost of living, why didn’t they? COVID-19 aggravated the situation but poverty existed long before the pandemic crippled our economy. It existed when both Mr. Ramkalawan and Mr. Faure had control over their respective branches of Government. And though Mr. Ramkalawan is loathe to admit it, he was neck-deep in Government for the past four years. He refuses to let the public realise that the Legislature (ie the National Assembly) is the branch of Government that directly governs the Country because it REGULATES. If we want to know what things will look like under LDS, we have already had an avant gout.

We need to move forward. We cannot sacrifice our own beliefs to cater to politicians who are determinedly pushing agendas that no longer meet the needs of the masses (treating drug traffickers as victims, for one). One Seychelles will end the cycle of Government (whether it be the National Assembly or the Executive) catering to the needs and interests of the wealthy, powerful and the privileged over ordinary citizens. Don’t sign up for more of the same. If you did, you would get no different to what you always have.

Message from Madrid – We Have to Wake Up, Quickly